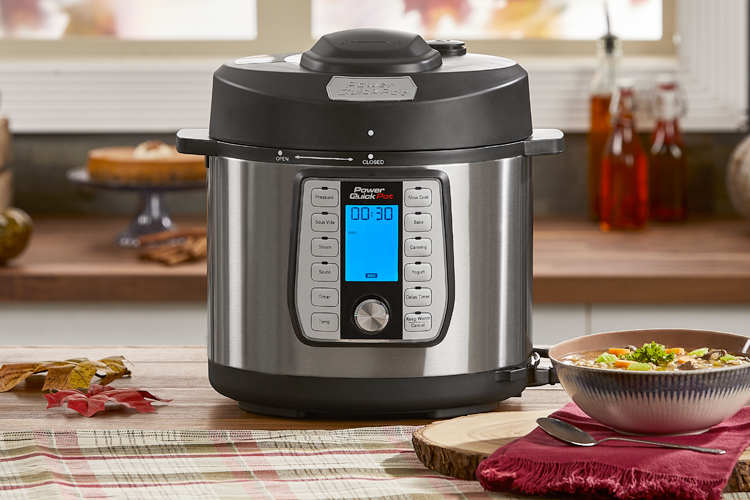 “The Power Pressure Cooker XL started the one-pot, one-touch revolution. Finally, busy families had a way to cook a delicious dinner – without actually having to cook” said Keith Mirchandani, President & CEO of Tristar Products, Inc. “For 2018, the Power Quick Pot is our newest breakthrough innovation in pressure cooking technology. With a whopping 37 different One-Touch Smart Buttons, you get an extremely versatile, multi functional kitchen appliance. Mouthwatering, home-cooked meals are effortless & fast – almost any way you want to cook – even cakes bake 70% faster. The food and cooking community was so excited about our product; we hosted four celebrity chefs for a Quick Pot Cook-off you can watch during our 60-minute infomercial.”

“I was lucky enough to be able to test out the Power Quick Pot before it hit the shelves. My daughter and I love pasta, so the first thing we did was spaghetti. We threw it all in from dry, with sauce and still-frozen meatballs. Minutes later, we were enjoying succulent, perfectly cooked pasta for dinner. I’m picky – I won’t eat overcooked spaghetti – and this was perfect. With hardly any clean-up!” said Norah Alberto, Director of Global Communications at Tristar. “And when I watched the chefs shoot the cook-off, I was even more amazed. Forget spaghetti, they were making everything! Short ribs, arroz con leche, chocolate-peanut butter cake, and even homemade yogurt with fresh fruit. You get a super-charged multi-cooker that fits right in your kitchen cupboard. So it’s perfect for everyday cooking and holidays and gatherings.”

Tristar shot the 60-minute Power Quick Pot infomercial at the Company’s 65,000-square-foot production studio in Fairfield, NJ. “This multipot does everything for you, and you’re going to have perfect meals every time,” announces American Idol star Kimberly Locke at the beginning of the show. Celebrity chefs include Monti Carlo, top finalist on Master Chef season 3 and host of Food Network’s Help My Yelp; Rock Harper, winner of Hell’s Kitchen season 3; Jenny Behm, winner of season 2 of Master Chef; and Ryan Scott, featured on Top Chef and Rachel Ray. Contestants competed to win a generous donation to their favorite charity by participating in a series of Power Quick Pot recipe challenges such as “Meals in Under a Minute” with “no stove, no broiler, [and] no frying pan… just one pot.” In addition to an exclusive recipe book, Tristar has produced four additional cookbooks, each written by one of the celebrity chefs.